From store worker to firefighter 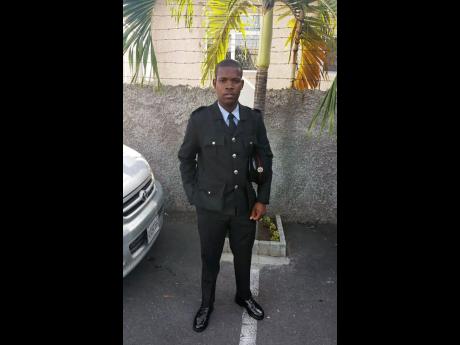 Firefighter Christopher Stewart stepped foot in the Jamaica Fire Brigade close to three years ago and today he thinks it's the best decision he has made as a career path.

Stewart, 25, joined the fire services after garnering some amount of work experience at Ammar's.

He told THE STAR, "I worked at other places but Ammar's on King Street is where I got the real work experience. From Ammar's, I made the transition to the fire services."

Stewart said his aunt Erica Gilbert-Hope was the one who introduced him to the fire services.

Since joining the fire brigade, Stewart said it has been fulfilling.

He said, "I think it's one of the best jobs in Jamaica. I don't regret it one bit. The work is good. It's a hard and demanding job but it's very relaxing as well."

He told THE STAR that it is the type of job where you can't plan to leave, even at the end of a shift.

"Sometimes you work 7 to 3 and then when 3 p.m. comes, you may have to work a double shift. It's a job that you can't always plan when you going home to your family. Anything can happen at any time, especially during hurricane season where we are the first responders," Stewart said.

Stewart told THE STAR that time spent with colleagues is also significant.

"Being at work is like a family away from home. We spend most of our time at work so we spend more time with coworkers than family," he said.

He recounted one of his most memorable days on the job.

"We responded to a call that a motor vehicle was on fire in Smokey Vale. I was pleased because I was the one who extinguished the blaze. When we arrived, the fire had engulfed the car but within a few minutes the fire was extinguished", Stewart said.

He also told THE STAR that from time to time, they are called on to visit schools during career day and speak to students.

As with any organisation there is room for improvement and the fire services is not excluded.

Stewart said he would love to see an improvement in the equipment, tools and gear.

But notwithstanding, he said being a part of the fire services is something he would recommend to anyone.

He said, "It's a very good job. There is a rank structure where you can move from point A to point B. There are vast opportunities for the well being of individuals and it can be rewarding and fulfilling."