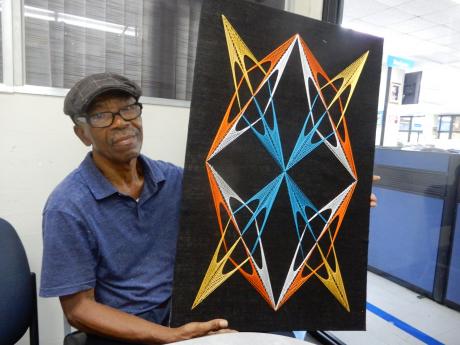 Retired educator George Lecky has found a new passion in his sewing creations. 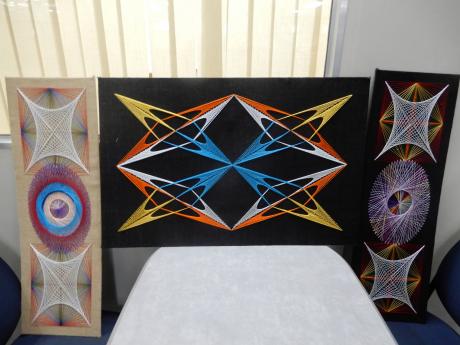 When George Lecky retired from his teaching profession, his love for visual arts didn’t die.

But he wanted to showcase another style in the field.

‘Pythagorean Art' is what he calls his style, which involves him sewing different designs on cartridge paper and other materials.

“I started doing this style in 2014. It's not like I saw anyone doing it, I just envisioned something and started. The thing about art is that it allows you to expand on your imagination and sometimes work with it. I started sewing on a cartridge paper and the first time I took them to church I sold all eight pieces for $500 each,” he said.

A former art teacher at Buff Bay High and past principal of Tranquility All Age School, both in Portland, Lecky said he got even more inspired after seeing how his designs were accepted and appreciated by those around him.

He told The STAR that he has been earning a suitable income from his pieces which he said are in high demand.

“Each morning I get up it's like I get a new design. I continued doing them on thicker material and frame them and it works. I demand ‘good’ money and so far it has been going good. I had an exhibition in August and I sold about 10 pieces. I get as much as $10,000 or more sometimes,” Lecky said.

In a few days, Lecky will airmail three of his collections to his daughter overseas. He stated that he wants the designs to remind her that although she is currently going through a difficult ordeal, there will be a bright light at the end of the tunnel soon.

“This big piece that I do now is called 'Hope'. I want her to look at it and let the golden arrows on it remind her that she won't be down for long ... she will be going places. I want her to feel happy. I left a piece with her and she got it sold online,” he said.
When asked if Jamaicans are appreciative of his visual art styles, Lecky instantly nodded his head.

“It is very eye-catching. Visual arts on a whole is really appreciated by lots of Jamaicans. It looks quite exquisite and will boost the appearance of any home or office space,” he said.