Maroons off the mark in JPL 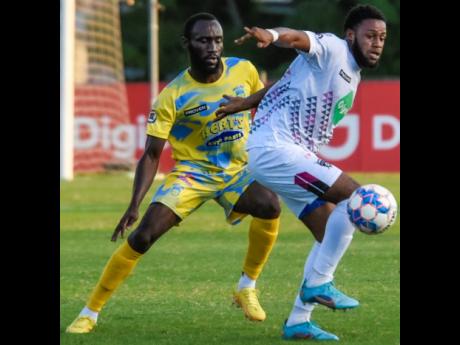 Rohane Brown (right) of Chapelton Maroons gets ready to control while being pressured by Damion Binns of Waterhouse during their Jamaica Premier League match at Stadium East yesterday. Maroons won 1-0.

The Lenworth Hyde-coached Maroons, who started spritely, opened their account in the 20th minute as Rohane Brown slotted home his first goal of the season, following a solid build-up.

"Very excited, honestly speaking because we had many firsts today - first goal, first three points and first clean sheet in top-flight football. We didn't place any pressure on our players even though we knew the Waterhouse team is a quality team and are actually one of the favourites to take the title, but we were still going to play our brand of football, which is the Lenny Hyde way of football," said Vincent.

Vincent, despite the win, believes they have to improve while also trusting the style of play being implemented by Hyde.

"We need to maintain possession of the ball better, protect it better and play the Lenny Hyde method because that has been tried and proven. Three Premier titles with three different teams, there's not much to say about his style of play," added Vincent.

The Marcel Gayle-coached Waterhouse came close on two occasions. In the 24th minute, Damion Binns' free kick rattled the crossbar and then in the 32nd minute, Devroy Grey's header was again denied by the upright.

Waterhouse have followed up their opening day win with three straight defeats without scoring a goal.

"We didn't take our chances and we paid for it. From the season started we have been conceding some easy goals and we have to fix it. Defensively, we are just conceding goals foolishly and we are not concentrating," said Gayle.

In the evening's second fixture, it was the Theodore Whitmore-coached Mount Pleasant who had the better first-half chances, with captain Sue-Lae McCalla's shot smartly saved by Portmore's goalkeeper Benjamin Williams in the ninth minute.

The former Clarendon College standout, Williams, was again called into action in the 39th minute as Jomoi Topey's long-range effort was easily handled.

The Phillip Williams coached-Portmore United were drawing their fourth match of the season, while Mount Pleasant following their victory on an opening day, have followed up with back-to-back draws.