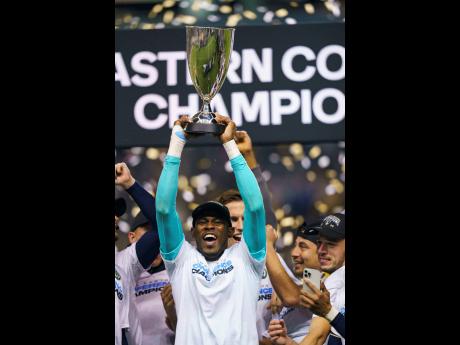 The 31-year-old Blake received 7.87 per cent of the votes in comparison to Mukhtar's 48.08 and Druissi's 16.80. The award winner is determined by a poll of players, club technical staff and media.

Blake, who leads the MLS in clean sheets with 15 this season, back in October, was named the All-State MLS Goalkeeper of the Year, in the process becoming the first player in league history to have won the award on three occasions, having also done so in 2016 and 2020.

Adding to his already-remarkable season, the former Clarendon College standout, in the regular season, conceded a league's best 26 goals, the least ever conceded in a 34-game season.

Blake will be looking to close his season in style by winning his first MLS Cup, as his Eastern Conference-winning Philadelphia Union will tackle Western Conference winners and in-form Los Angeles FC in the MLS Cup final on Saturday.