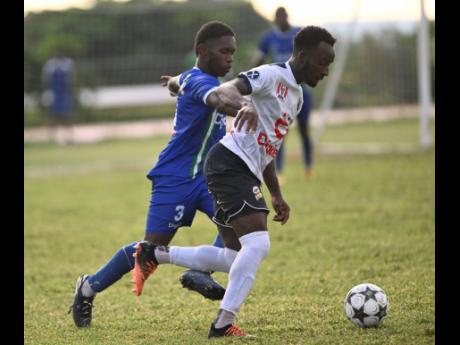 "It was a good performance. Once we got the early goal, we kind of went into a lull, so we had to make a few changes in the first half because we wanted to shake things up a little bit. I think we got that wake-up call, and as the game progresses, we played a lot better," said Ferguson.

The 'Dark Blues' of Hope Road, who scored the most goals in the first round of the competition (54) while conceding the least (3), opened their account in the fifth minute due to sloppy defending as the dangerous Maquan Aldridge pounced on a loose ball and slotted home from close range.

J'Havier Lynch, who was an ever-present threat in the box, sent JC 2-0 up by the 40th minute, following his break-away play which resulted in a calm finish. Three minutes later Michael Graham's brilliant strike from outside the box made it 3-0, and strikes in the 60th minute by Dyllan John and a 78th-minute hard low strike from Jahmarly Bennet added insult to Norman Manley's injuries.

JC's unbeaten run has been extended to 11 games and Ferguson argues that they must perform to keep their quest of winning their 31st title alive.

"At this stage of the competition if you lose, you're out, and we have to keep on winning from here on in. We could have controlled the game a little bit more as we were slow in terms of passing the ball around," Ferguson added.

Shane Gage, head coach of Norman Manley who qualified for the second round as one of four best third-place teams, is proud of their efforts, despite the defeat.

"With all things we have to give God thanks, it's not the best result but we are grateful. The boys showed heart and they fought until the final whistle," Gage said.

"We started the game too slow because we showed a little too much respect to the JC team, but at different times in the game, we showed what we were capable of doing and I'm just proud of my boys.

"It's basically a young team and we are starting our programme all over so the fact that we progressed to the second round it speaks to the quality of the players and speaks to the ongoing programme at Norman Manley," said Gage.