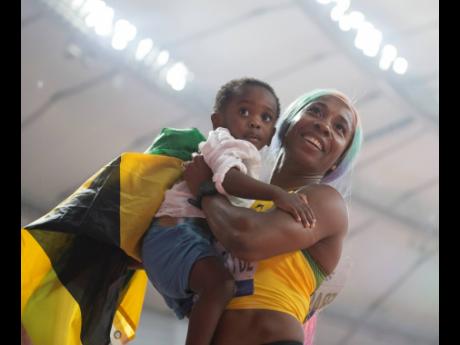 World Championships 100 metres winner Shelly-Ann Fraser-Pryce claims that requirements to her son, Zyon, were the reason she had initially pulled out of today's 100 metres Diamond League final in Zurich, Switzerland.

According to Fraser-Pryce, she made a last-minute decision to compete, after her plans to accompany her son on his first day of school were postponed.

"Lausanne and Brussels were going to be my final races for the season because I had commitments with my son starting school back home and it was going to be his first day, so Zurich was actually not going to happen because of that," Fraser-Pryce said.

"I was ready to go home and it was, maybe, divine intervention where I got an email from his school that they were postponing that day. It actually happened last night virtually so that's why I ended up being here and not running in Lausanne.

"I thought after getting treatment and getting that run in Brussels, I could definitely do this one and get it out of the way," she continued.

Fraser-Pryce also said commitments to her five-year-old son also affect her participation in the indoor season.

"It's been a while since I have attempted the indoor season. I think for me, especially at the age that my son is, sometimes making sacrifices for what it is and I couldn't do it this season. Hopefully, I will be able to do some next season because I want to do some," the mother and sprinter said.

The five-time 100 metres World Championships winner stated that she also feels more confident about her hamstring strain recovery and is looking forward to the competition, which is her first Diamond League final since 2019.

Fraser-Pryce will line up in the 100 metres Diamond League final today along with fellow countrywomen Shericka Jackson and Natasha Morrison.

Joining them are Sha'Carri Richardson, Aleia Hobbs and Twanisha Terry of the US; Daryll Neita of Great Britain and Marie-Josee Ta Lou of the Ivory Coast.