Hard to go against Mamma Mia in Pick 3 Super Challenge 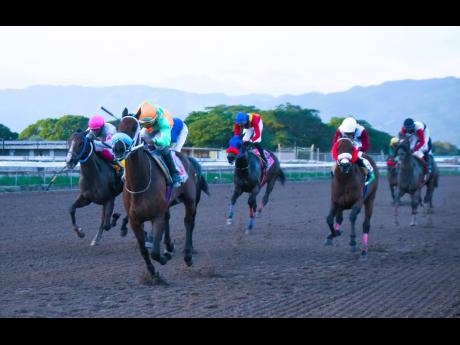 Laban ridden by Anthony Thomas strides to an easy victory in the three-year-old and upwards non-restricted overnight allowance event over seven furlongs at Caymanas Park on Sunday.

MAMMA MIA's pedigree was never in question, a half-sister to Fayrouz (Blue Pepsi Lodge), winner of the 2018 Jamaica Oaks before placing second in the St Leger and third in the derby among colts that year.

Having raced only once, however, MAMMA MIA was underestimated at odds of 5-1 in the Cash Pot Trophy two weeks later, a race which she dominated from start to finish.

Returning at level weight in Saturday's Pick 3 Super Challenge with her rivals, it's hard to oppose MAMMA MIA, who turned back Richard Azan's colt, MOJITO, allowing him four pounds. MOJITO returned to stamp his class on maidens at six furlongs two weeks ago, clocking 1:14.0 at six furlongs in the BGLC/TOBA Jamboree Sprint for which the winning owner pocketed a $1 million bonus.

Though MOJITO won easily, trainer Richard Azan has decided to keep his colt away from MAMMA MIA, opting out of the Pick 3 Super Challenge with the Jamaica Two-Year-Old Stakes on the horizon on Boxing Day.

MOJITO staying at home leaves MAMMA MIA with a cast of her three stablemates - THALITA, UNCHARTER and SHE'S MYHEDGEFUND - taking on extras led by LEGIT BOSS, whose stamina limitations were exposed at six furlongs in the Cash Pot Trophy.

LEGIT BOSS boasts a maiden win over THALITA at three furlongs straight but the tables were turned when they met on the round course at five and a half furlongs. Returning for the Cash Pot Trophy fitted with a tongue tie, LEGIT BOSS appeared to be begging for head when restrained and simply flattened out in the stretch run, finishing 10 lengths in fifth place behind MAMMA MIA.

THALITA, who had chased and worn down LEGIT BOSS at five and a half furlongs, tried chasing but only saw MAMMA MIA's rump for the first four furlongs of the Cash Pot until MOJITO went second coming off the home turn, relegating her to third.

Jason DaCosta has fitted THALITA with a tongue tie, hoping for a better run than the fourth-place finish she mustered. However, similar to LEGIT BOSS, THALITA ran like an outright sprinter, as her breeding suggests, and will find seven furlongs a tall order against MAMMA MIA whose second dam is Miss Chestnut, producer of Triple Crown winner Mark My Word and Oaks winner Marlene My Love.

MAMMA MIA should again have things her way and should be followed until one of the colts, possibly MOJITO, steps forward in the Jamaica Two-Year-Old Stakes.