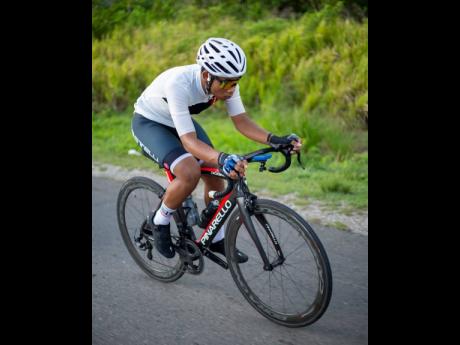 Chanelle finished behind Annabelle Miller of Bermuda who clocked 15:51.43 minutes with Rosselle Ogando of Dominica Republic, third in 18:55.64. Malaika, with 16.35.52 minutes, was runner-up to Charlotte Millingtong of Bermuda, who did 16.11.17.

"Half of the team went last year and they are trying to better what they did last year. We only got two medals last year and so far we have two already so we hope to double or triple that now," Clarke commented.

In today's road race competitions, Calel Francis, Christian McFarlane, Jaequan Dixon and Cajur Chue will contest the boys 15-16 age group and Clarke is upbeat about their chances of medalling.

"We have four riders in that race and we should get at least two medals. We should get medals from every race based on these athletes' preparation and where they are now," he said.

Bradley McFarlane and Jamane Douglas will compete in the 17-18 boys, Channelle Russell will contest the girls equivalent and her sister Malaika the pre-juvenile girls.

The best performances in the boys' category yesterday came from Cajur Chue, who clocked 14.03.51 minutes and Kristan McFarlane, who did 14.47.16 for fourth and seventh, respectively, in the pre-juvenile section.