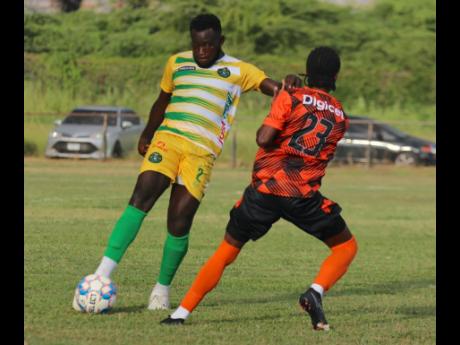 Ricardo Campbell (left) makes a clearance before being challenged by Tivoli Gardens’ Trevaune McKain during their Jamaica Premier League (JPL) match at Wembley Centre of Excellence recently. The match ended in a 1-1 draw. 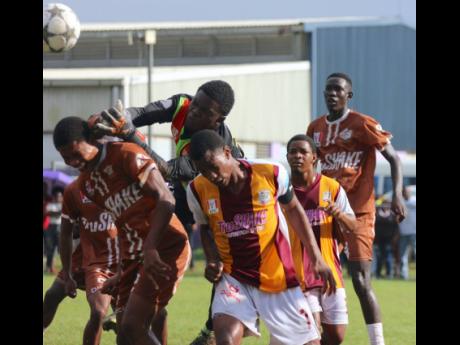 Surprised package Central High's Anrick Gordon has marshalled their resolute defence to stand up to some of the best teams in the competition, using words of encouragement from his father Ricardo Campbell to guide him.

Gordon's efforts have enabled the Clarendon-based school to reach the ISSA/Digicel daCosta Cup semifinals for the first time in their history after leading them to a 2-0 defeat of Edwin Allen on Tuesday. They finished second in Group B of the quarterfinals on goal difference behind leaders Clarendon College.

He plays centre-half for Central, which is like his father, Campbell, who is the centre-half and captain for Vere United in the island's top-tier football competition, Jamaica Premier League (JPL).

The utility player, who can also play left-back and central midfield, hopes he can assist in delivering Central's first silverware in their history, with his father being a major part of his play.

"We have a good team this year and my father has always inspired and encouraged me to go out and do my best. We believe in ourselves, but the key is to stay focused as my father always tells me to do, so hopefully, this year will be our year," Gordon said.

Campbell, who represented Central in the early 2000s, is proud of his son's achievements so far this season and is hoping that Gordon can do what he failed to do.

"I hope he can go on and win the daCosta Cup, which I never got to do. I believe this team can go all the way because they have the ability. You can see that they are a fighting team and they have done what no other Central High team has done.

"I believe they can pull off something similar to what Leicester City did in the English Premier League in the 2015-2016 season as an underdog," said Campbell.

Pundits had written off Central to make it to this stage of the competition, but Gordon admitted that one of their objectives was to at least make the final four, which they have done under coach Jermain Douglas.

Campbell, in the meantime, added that he wanted his son to go on a represent the country, as well as play professionally overseas.

"I always talk to him and keep telling him to improve on his game. I let him know that he has to put in the work and the work will show," Campbell said.