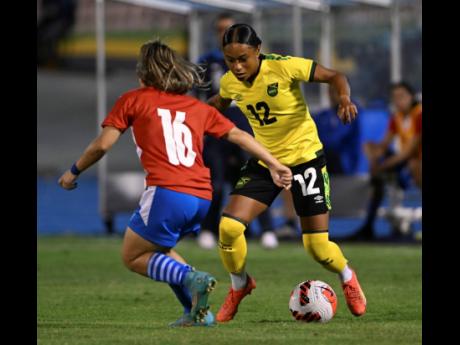 Jamaica’s Siohban Wilson (right) gets ready for a challenge from Paraguay’s Ramona Martinez during their friendly international match at the National Stadium yesterday. Paraguay won 2-1.

Woeful efforts in front of Paraguay's goal proved to be the Reggae Girlz' Achilles heel yesterday as they went down 2-1 to Paraguay in their friendly international at the National Stadium.

The Lorne Donaldson-coached Reggae Girlz had clipped Paraguay 1-0 at the Montego Bay Sports Club Complex in Montego Bay on Thursday and were playing their first match at the National Stadium since they secured qualification for the FIFA Women's World Cup in Australia and New Zealand in the summer.

Paraguay opened their account in the 16th minute, as sloppy defending proved to be the Reggae Girlz' downfall with Celsa Sandoval pouncing on her chance for the lead. By the 35th minute, the Jamaicans were down 2-0 as Ramona Martinez made them pay for another defensive error for the guests to go into the half-time break with the advantage.

In the second half, the Jamaicans were rewarded for their constant pressure on goal as they were gifted a penalty, which in-form striker Khadija 'Bunny' Shaw calmly slotted home in the 62nd minute.

Donaldson believes the lacklustre body language which the Reggae Girlz displayed on the field was evident from the warm-up exercise before the start of the fixture.

"We started off very slow, and I saw it coming, which was evident from the warm-up. Our camp is a little different from Paraguay because we are still looking at players. We still want to win, but it wouldn't be at all cost.

"In the second half we made some adjustments and we came out with a lot more energy. Sometimes it became a wide-open game, which was good for the fans. We have to give Paraguay some credit, they came out and they fought, and they played well," said Donaldson.

Reggae Girlz striker Drew Spence created the majority of their chances, which were either denied by goalkeeper Cristina Recalde or saw her shots coming close to the target.

This, according to Donaldson, was a testament to Recalde's performance during both games.

"The 'keeper played well again tonight, but such is the game. We just have to come back next time," Donaldson added.