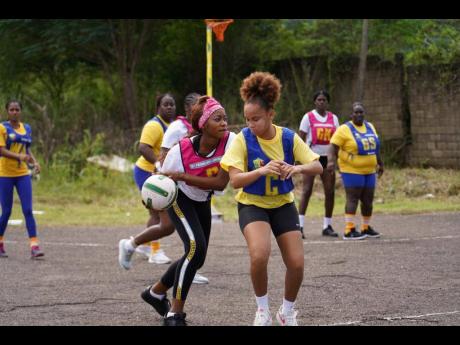 Members of Jackson Town (yellow) engage opponents of Warsop during the netball section of the Social Development (SDC) Trelawny leg of the Four-In-One competition at the Duanvale Community Centre on the weekend.

Intense action across the island highlighted the second week of the all-island Social Development Commission (SDC) Four-In-One competition, as communities vie to represent their parishes in the new-look innovative four-discipline spectacle, which features sports and culture.

The SDC train made its first stop in Trelawny where 11 communities matched their skills in netball, football and domino competitions as well as talent pieces, to decide who get the nod to the national final.

In the end, Jackson Town emerged as the overall champions after amassing 30 points as they secured 12 points from netball, 10 from their talent piece, six from football and two from domino.

Duanvale finished a close second with 27 points followed by Clark's Town with 19.

Netball representative of Jackson Town Claudette Cooke said they enjoyed the rivalry brought about by the new-look SDC Four-In-One.

"Today was a lovely day. We came out with an open mind and we represented all the disciplines. Words can't explain how happy we are and we are going to represent our parish Trelawny in fine style, no doubt," Cooke said.

Paula Barrett, parish manager for the SDC in Trelawny, stated that the initiative is worthy of national commendation with the impact it is having on youth development.

"This competition speaks to bringing people together and more importantly showcasing young talent. What is also important is that a lot of community groups are being built as more and more participants look to get involved in sports in a structured manner," Barrett said.

In the meantime, Mandeville will be joining Jackson Town at the parish round after they were crowned Manchester champions by amassing 32 points. Huntley placed second with 29 points while Banana Ground was third with 27 points.

Port Morant will also get a chance to showcase their talent at the national level as they took the St Thomas championship over Stokes Hall in second and Duhaney Pen in third.

Two more parish finals will be decided next week with Greater St Catherine and St Mary taking the spotlight.