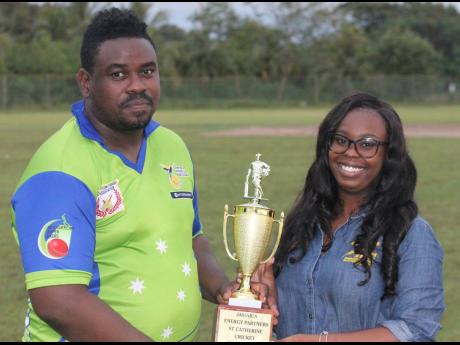 Super Sixers took first strike in the match reduced to 17 overs because of a wet outfield, and posted a mere 98 in 15.5 overs, with Kern Duckett top scoring with 19 and Roy Williams chipping in with 17.

Lloyd Gould made 15 against four wickets for 16 runs from Jameel Bryan and three wickets for 28 runs from the tournament's leading wicket-taker Fitzroy Hunter.

Packers All-Stars fared no better in their reply, as they were routed for 63 in 15 overs in fading light with Albert Rose top scoring with 12 and Bryan getting 11.

Former national youth player Brandon English did the bulk of the damage with his off-spin by claiming four wickets for 12 runs. He was backed up by fellow off-spinner Junior Morrison, who bagged three wickets for a mere three runs.

Bridgeport Super Sixers walked away with the championship trophy and $90,000, while Packers took home $45,000.

Winning captain Jermaine Gordon praised his players for going through the season unbeaten on their way to the title.

"We have been working hard right through the season and the guys bowled and batted well by displaying good all-around cricket, so to come out victorious at the end, I am very elated," said Gordon.

President and CEO of Jamaica Energy Partner, Wayne McKenzie, who watched the final, says his organisation will continue to support the competition, which has unearthed several national and international cricketers.

"We wanted an avenue to unearth and hone some of the talents this side (of the country) and we have had some wonderful results in the likes of Nkrumah Bonner and Tamar Lambert to name a few who had come through this system," McKenzie said.