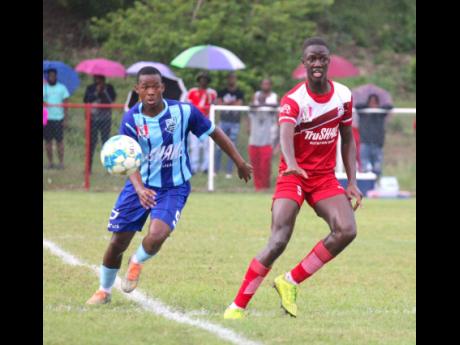 Manning's School and Glenmuir High battled to a 0-0 draw in their Group Four ISSA/Digicel daCosta Cup match yesterday at Glenmuir and respective coaches, Everton Tomlinson and Andrew Peart were elated with the result.

Both institutions, with the draw, are just a point away from progressing to the quarterfinals, as they possess identical records of one win and a draw, with a goal difference of two.

They are in good stead to progress on Saturday, when Glenmuir face Edwin Allen on one point, in a Clarendon derby and Manning's host St. Elizabeth Technical High School (STETHS), who are also on one point at the Llandilo Sports complex.

Hosts STETHS and Edwin Allen played to a 1-1 draw in their match yesterday.

"The encounter saw two very good teams and I thought we displayed more quality on the ball, however, the quality of chances was not matching the build-up play to get into the final third, so all in all a fair result," said coach Andrew Peart of Glenmuir.

"I am pleased but I was expecting more from this game," said Everton Tomlinson, coach of Manning's. "I thought we had the opportunity, especially in the first half but the end result is that we didn't lose and under the circumstances it is commendable."

In a fiercely defensive contest, Manning's looked the more comfortable when advancing in the first stanza.

In the second half, Manning's should have taken the lead when Devonte Rodney latched on to a through ball, but he put his effort wide of the advancing Mickayle Williams in goal for Glenmuir.

Williams was at his brilliant best once again deep in the second half as he denied top marksman Jhamaleek Porter from close range.

Player-of-the-match Williams denied what clearly would have been the winner in stoppage time when he parried a fierce right-footed drive from just outside the area from Abeena Wallace.