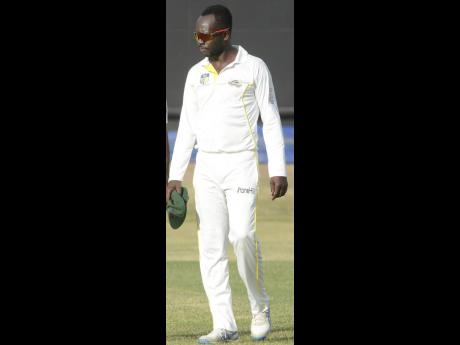 Jamaica Scorpions' assistant coach Nikita Miller wants a positive start to their Super50 Cup campaign as they seek to add to their seven outright and one shared titles in regional limited overs competition.

Scorpions bow into action today at 1 p.m. (Jamaica time) when they face the Leeward Islands Hurricanes in a day/night encounter at the Sir Vivian Richards Stadium in Antigua.

According to Miller, his players have been practising well and are ready for the challenge that Hurricanes will pose in the tournament, which was first dubbed Super50 in 2013. He stated that they have had three net sessions leading up to the match.

"It is very important for us to start on the front foot because it's hard to chase after losing a game early. We will be looking to get that first win and stay positive as we look to go deep in the tournament," said Miller.

The last time both met in February last year, Scorpions had a narrow six-run win under the Duckworth-Lewis method. The Hurricanes have already tasted victory in this year's competition, having beaten the West Indies Academy by three wickets.

Miller noted that Scorpions will not be daunted by Hurricanes' win, as they will be going all out to play their brand of cricket.

"You try to isolate each game because the mindset coming up against the emerging players may be different for the Leeward Islands guys coming up against us. What we will do is to take some things away from their opening game and try to nullify their batters and dominate their bowlers," added Miller.

The Scorpions, who will be led by Rovman Powell, should have Brandon King, Chadwick Walton, Odean Smith and Andre McCarthy to bank on for batting. Fast bowler Sheldon Cottrell has not yet joined the squad and will be unavailable for the opening fixture.

Miller says the make-up of the final 11 will be done just before the game, however, he is expecting the pitch to play on the slow side, which could see spinners Jeavor Royal, Dennis Bulli and Peat Salmon factoring.

"The surface looks like a slow one and may spin a bit. The average first-innings score at the Sir Vivian Richards ground is 230, so if we bat first, we would want to bat all 300 legal deliveries and try to put pressure on their team, and when we bowl we want to be as disciplined as possible," Miller said.

The Leeward Hurricanes will be banking on first-match centurion Keacy Carty who scored an unbeaten 103 against the Academy team. They will also have the experienced Kieran Powell and Devon Thomas at the top of the order with their bowling expected to be led by spinner Rahkeem Cornwall and Jeremiah Louis.