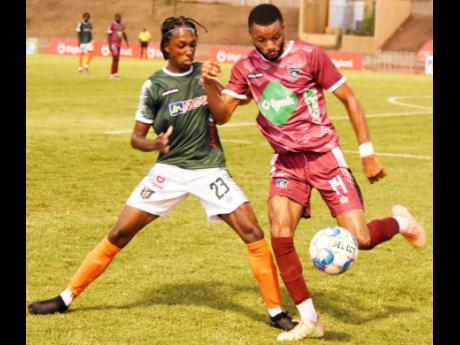 Five-time Jamaica Premier League (JPL) champions Tivoli Gardens controlled the match from start to finish and had the lion's share of ball possession while defeating Chapelton Maroons 3-0 in their encounter at Stadium East yesterday.

The Jermaine 'Teddy' Johnson-coached Tivoli, on a chilly afternoon and on the back of two first-half strikes by Keno Simpson in the 16th minute and Diego Mckenzie in the 23rd and another from Anthony Nelson in the 58th, secured their first victory of the season.

Tivoli also effectively nullified Maroons' efforts keeping them at bay, as chances for their Clarendon-based opponents were few.

Contrastingly in the day's opening fixture, which was a physical encounter, Molynes United head coach Alex Thomas described the feeling as "elation" as his charges bounced back from their opening-day defeat to Waterhouse, to register a 3-2 victory over Humble Lion.

"I'm feeling elated, very happy because that was our objective to get three points on the board. Last week we got a lot of chances against Waterhouse and we never take them so we went back to the drawing board. Today we were playing against a Humble Lion team with experience, so they're going to come at you, but kudos to our boys," said Thomas.

Tyrique Wilson's calm and composed penalty in the fifth minute of the fixture gave Molynes an early 1-0 lead, which was erased by Humble Lion's Andre Clennon in the 20th minute. Ten minutes later Wilson was again on the scoresheet carrying them to halftime with a 2-1 lead.

Ten minutes into the second half Rashawn Livingston's breakaway gave Molynes United a 3-1 lead while Humble Lion would get their consolation goal in the time added on, through Andrew Vanzie.

Humble Lion coach, Andrew Price, was upset by the result and believes they have only themselves to blame.

"I'm disappointed. I don't think the team played well enough to deserve three points and I believe that we really shot ourselves in the leg today as majority of the goals were self-inflicted. We made defensive errors and they cost us," said Price.