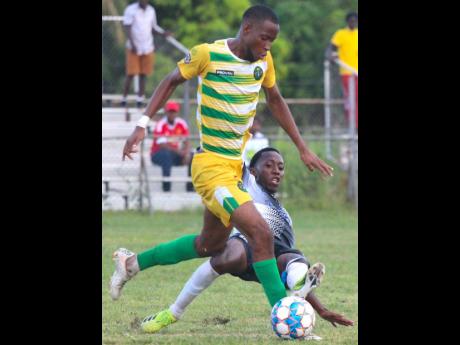 Cavalier secured a workmanlike 3-0 win over Vere United in their Jamaica Premier League (JPL) encounter at Wembley Centre of Excellence yesterday, despite coach Rudolph Speid insisting they are still rebuilding after losing 12 players from last season.

The former champions unleashed several youngsters on the more experienced Vere, who had their full complement of players this week, following last week's draw against Tivoli Gardens with only 12 players in the squad. The current average age of Cavalier is 19 years old.

"I am pretty pleased with the outcome and I was not expecting such a large margin of victory, but the conditions weren't the best so we had to adjust for that. This team is young and it is going to take some time for them to learn," said Speid.

Heavy showers which greeted the players at the start of the contest forced the officials to suspend the game after just 16 minutes, but when the showers passed after 30 minutes, Cavalier returned hot and Vere United, seemingly cold.

With the Vere backline slow to come out of their area, Cavalier seized the initiative and pressed and duly got the opening goal in the 42nd minute through Collin Anderson.

The bleached-hair Anderson picked up a ball close to the centre circle and outpaced defender Kenroy Lumthen to rifle a shot past the advancing Rojae Williams in the Vere goal.

That was the only goal of the half, but the second stanza had more of the same from the ever-running Cavalier, who doubled their lead in the 68th minute through Dwayne Atkinson.

It was nifty work down the right from Anderson, which set up the goal, as his floated cross inside the area found the head of Atkinson, who glanced his header over substitute Laston Reid and goalkeeper Williams.

The contest was then wrapped up in the 74th minute when Anderson found himself with time and space inside the Vere area, and his deflected shot sent the goalkeeper the wrong way.

After pulling off a heroic performance last week against Tivoli, coach Linval Dixon lamented a poor outing for them.

"We made some errors and our concentration level was not great. After the rain break, the players just seemed to come out cold, and overall it was a bad day at the park," said Dixon.