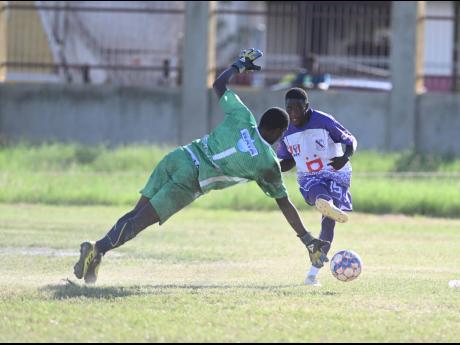 Kingston College (KC) coach, Raymond Watson, is imploring his charges to remain focused on their goal, after registering a commanding 2-0 victory over hosts Waterford High in their ISSA/Digicel Manning Cup football Group A encounter yesterday.

KC, the defending champions, were returning to winning ways, after getting humbled by North Street rivals St George's College last Saturday and Watson believes that it was crucial to secure yesterday's victory, as they look towards their goals.

"I was confident we would have rebounded. Against St George's, unfortunately, we lost. Maybe it was good that we had a bump in the road, but we definitely expected the three points here today.

"It's very important, words can't say how much important it is for us to remain consistent. We also want to top the zone and be in the Champions Cup as well, so we will have to stay grounded and focus on the next game and, hopefully, another three points," said Watson.

Group A leaders KC had the lion's share of possession and took the lead in the 32nd minute after sustained pressure on Waterford's defence as talisman Nashardo Gibbs slotted home over goalkeeper Alphonso Salmon.

KC, who have booked their ticket to the second round of the competition already, made it 2-0 in the 72nd minute as Gibbs secured his brace, following his powerful shot.

Waterford, with the defeat, are in a wait-and-see situation, to know their position with qualification to the second round of the competition. They can advance as one of the four best third-place teams.

Waterford coach Kevin Reid is emphasising patience with his young players, who are gaining experience in the competition.

"I'm not disappointed with this result. We played an excellent team in Kingston College, so we have nothing to be ashamed of. We are a young team, these guys are inexperienced, so we are taking our time.

"The window now gets small for us and now it's a mathematical chance. We just have to see how the other games go and then we take it from there come Saturday," said Reid.