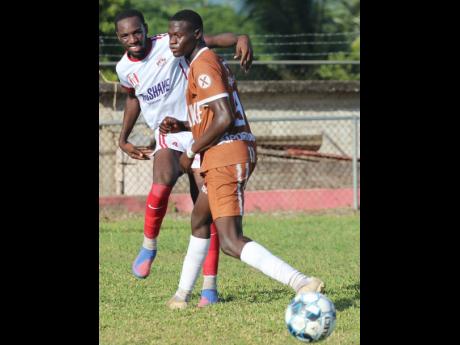 Glenmuir High’s captain Zakari Messam (left) makes a clearance before the onrushing Javel Barnes of Central High, during their ISSA daCosta Cup encounter on Thursday at Effortville Community Centre. The match ended in a 1-1 draw.

Glenmuir High have one of the best defensive teams in this year's ISSA/Digicel daCosta Cup schoolboy football competition, having conceded just three goals in six games to date.

One of those leading that defensive charge is captain and centre-back Zakari Messam, a sixth-form student who is in his final year at the institution.

At first glance, the 18-year-old Messam could be mistaken for one of the teachers at the institution, due to his manly looks and his no-nonsense demeanour, which he portrays both on and off the field.

For Messam, however, discipline has played a key part in his leadership, as he continues to marshal his troops throughout another tough schoolboy football campaign.

"I try my best to motivate my teammates and keep them focussed throughout the duration of the game and even off the pitch.

"Communication, organisation and teamwork have been our mainstay as a team, and sometimes we may lapse, but we always try to make up for that and improve on the training ground," he said.

Messam, who has represented Jamaica at the under-14 and under-15 levels, as well as Frazier's Whip in the local competition, has mimicked his game off one of the game's best defenders currently in the world.

"I really admire Virgil Van Dijk of Liverpool. The way how he reads the game and his positioning is tremendous. Most importantly though, I also admire his leadership," Messam said.

Part of being a leader for Messam means also doing well in school. Currently, he has nine CXC subjects, and he is hoping to one day go on to further his education via a scholarship to study business.