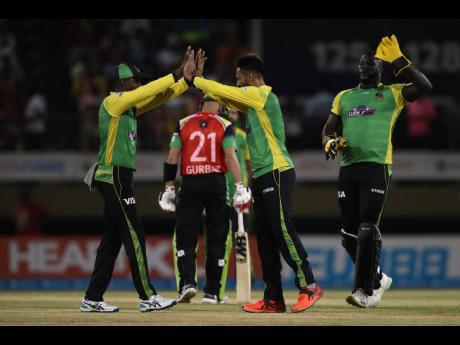 Mohammad Amir (centre) of Jamaica Tallawahs celebrates with teammates after getting the wicket of Paul Stirling of Guyana Amazon Warriors during qualifier two in the Caribbean Premier League (CPL) at Providence Stadium yesterday, in Georgetown, Guyana.

Shamarh Brooks epitomised Tallawah's meaning as he was powerful and strong last night with a masterful unbeaten century, which helped the Jamaican franchise book a place in the Caribbean Premier League (CPL) final, following a 37-run win over Guyana Amazon Warriors in qualifier two at the Providence stadium.

The Barbadian right-hander scored his first Twenty20 (T20) century to guide the Tallawahs to the highest total in this year's CPL, following their 226 for four against the shell-shocked Warriors, who made a fist of it and managed to get to 189 for eight.

Player-of-the-match Brooks was in scintillating form for Tallawahs, who were sent in to bat on a surface that was offering a bit for both bat and ball. Brooks anchored a couple of significant partnerships, despite Tallawahs losing two early wickets to Romario Shepherd.

Brooks first added 55 runs for the third wicket with captain Rovman Powell who made 37, then added 52 with Raymon Reifer who scored 22 and then a whopping unbroken 103 with Imad Wasim who was left not out on 41 from 15 balls with four fours and three sixes.

Brooks, who was dropped by the wicketkeeper when he had scored just five runs, went on to score 109 not out off 52 balls with seven fours and eight sixes.

It was total carnage in the final five overs which went for 103 runs, as Brooks and Wasim hit the ball to all parts of the Providence Stadium.

Faced with the imposing total, the Warriors showed positivity towards the run chase by scoring 95 runs in the first 10 overs, but the loss of wickets regularly meant they were always behind the eight ball.

Keemo Paul made a valiant attempt with a fighting 56 but when he fell to Wasim at 149 for seven, it was virtually all done and dusted for Tallawahs.

Brooks summed up what has an excellent night personally and a tremendous achievement for the franchise.

"I am just happy that we are in the final because that was one hurdle we wanted to cross. It's been a wonderful year for me in this format and I am just taking it stride by stride and looking forward to the final on Friday night," Brooks said.