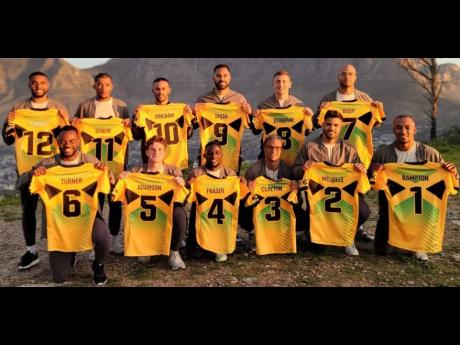 Members of Jamaica’s team to the recent Rugby World Cup in South Africa.

Jamaica Crocs ended their recent Rugby Sevens World Cup campaign winless, but members of the local fraternity are still proud of being able to participate in the event.

Chairman of the Jamaica Rugby Football Union (JRFU), Jerry Benzwick, said despite Jamaica's last-place finish, making it to the competition, which was held at Cape Town Stadium in South Africa, was an achievement.

"Jamaica Crocs Sevens finished 24th in the world. Out of over 150 countries, we finished 24th at the World Cup. Just qualifying for the rugby World Cup is an achievement on its own and we are the first Caribbean nation to do this. Now we have done it twice.

"We are proud of this team for qualifying and making history and just for taking the pitch and facing the level of competition they did. Yes, it would have been great to have gotten a win or two but these boys showed spirit and fight. What we have to do is get them better prepared so they can perform at their best," Benzwick said.

It is the second time that hopes were dashed for Jamaica at the Rugby World Cup Sevens, as the Crocs also ended their first World Cup in 2018, which was held in San Francisco, United States of America (USA), without a win.

The JRFU, however, is refocusing hopes to achieve the feat in future tournaments.

"Our mantra is 'stay in the fight'. We are still in the fight and expect to continue getting better and growing in 7s rugby," the JRFU chairman said.

Cameron Melville, who co-captained Jamaica with Tyler Bush, believes the players put up a good fight even though they were unable to get Jamaica a first win at the tournament.

"The team showed promising moments against Scotland, a much bigger rugby nation, however, we then failed to develop further in the competition and put away a competitive game versus Tonga, and then slipped off in the two final games versus Portugal and Zimbabwe.

"We recognised that there are lots of work to do if we are to finish higher in the future and compete against class outfits such as the ones we faced," Melville said.

Despite the losses, the 20-year-old said it was an experience which had many lessons and he is grateful for that.

"The experience was amazing but at the same time, we didn't rise to the occasion which left a bitter taste to the World Cup for me.

"The biggest lesson I learned was not to hold myself responsible for actions outside of my control. As a captain, it is your job to lead and set examples but you cannot expect everything to fall into place and you need to worry about your performance as a player first-hand," Melville said.

Jamaica is still ranked No. 1 in the Caribbean.