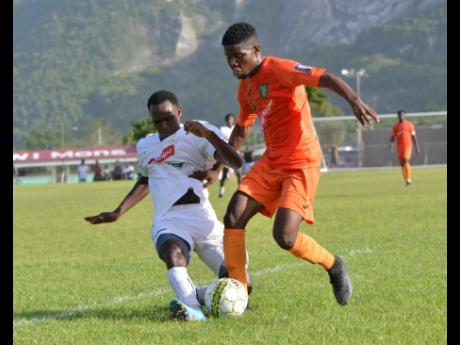 Tivoli Gardens’ Junior McGregor (right) tries to get away from a challenge by UWI’s Andre Humphrey in their Jamaica Premier League match in 2019. UWI won the game 4-0.

He went from lacing cleats to mixing beats professionally during the coronavirus pandemic, but according to the former Tivoli Gardens footballer, Junior McGregor, better known as 'Shukkle Bus', he misses playing football.

"Football is a fun sport and it's not just about the money or the exposure. I feel like that is my 'turn to', [because] when mi feel some type of way, a ball at my feet would cure everything," he said.

McGregor stated that his love for the sport continues despite unsuccessful attempts to return as a forward for Tivoli Gardens Football Club.

"The club refused to sign me, [but] I don't see myself playing for another club apart from Tivoli. In a way, it kind of shake me up; but in a way, I wasn't taking it (football) seriously, so that was the best decision for the management team [of Tivoli FC]," McGregor said.

He is now signed to Romeich Entertainment and plays at many functions, such as sports events, which he said makes him reflect on being a competitive sports person.

The 26-year-old McGregor said the career change was not a part of his plans at this stage of his life, but he is enjoying the moment.

"I was doing it before the pandemic, but I was taking football more seriously. The pandemic made people really know that I am a DJ. I am not seeing myself going back to the sport, but I must say I am enjoying everything [as a DJ], and everything is working perfectly fine," he said.

According to McGregor, for him, his careers are stark contrasts, as one is easier than the other.

"It is far different. Football would be more 'hackling', [while] DJing is easier. You earn more from DJing in Jamaica than playing football, [and] football is more physical, because you can get hurt more.

"DJing is easier, because all it takes is just to go home and work on your laptop, but in football, you have to train seven days a week, but as a DJ, you can just take up your laptop and go work," McGregor said.