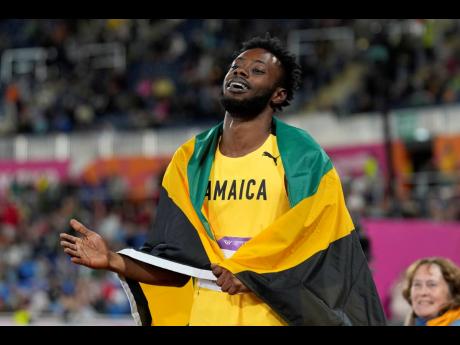 Rasheed Broadbell of Jamaica celebrates after winning the gold medal in the men’s 110 metres hurdles final at the Alexander Stadium at the Commonwealth Games in Birmingham, England, in August.

Rasheed Broadbell is crediting God and His timing for moving from 13.20 seconds in the 110-metre hurdles to becoming the third Jamaican to dip below 13 seconds in the event.

"All season I've been saying I'm in the best shape of my present session, so getting the sub-13 mark was probably a surprise to a lot but (my) coach and I knew it was going to come somewhere down the line," Broadbell said.

"I mean I don't worry about times. I'm young at this point in my career. I think I have enough time to try and achieve that goal but that's not my main aim at this point," Broadbell said.

In the meantime, he said he will continue to put in the work as he trusts and waits on God to achieve his athletic goals.

"Without God, we aren't anything, so for me, it's all on His timing and His doing. I have a strong faith in believing in God, so once I apply myself correctly I just leave everything else to Him," he said.

Broadbell went undefeated this August and among his victories was the Commonwealth Games gold medal in the sprint hurdles event.

"It felt really great hitting that goal for this season, just grateful for the journey," the hurdler said.

"Only time can tell," the Commonwealth champion said.

There are still other major titles to claim in 2022 as Broadbell is set to line up in the Diamond League final in Zurich, Switzerland, on Wednesday and Thursday, but as for winning that event, he said he has no expectations.

"I mean at this point, whatever the result is I'm grateful. It's truly a great feeling to even be in the line-up with all the great athletes, so whatever I get I believe that's what God had in store for me and everything is a learning process, so I can learn and better any result I receive.

"I learned to be patient and trust God and all His doing (as) this season has been tough with all the setbacks. I was going through a rough early season and to now get a massive PB in such a short space of time, it's just all timing and trusting, so, hopefully, next season will be greater," Broadbell said.