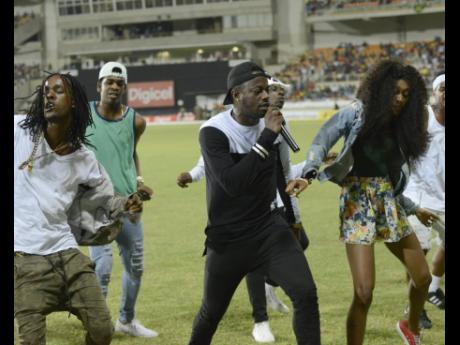 Ding Dong (centre) and the Ravers performing at Sabina Park in 2019.

It is now becoming a common sight for Jamaicans participating in different sports to celebrate their sporting achievements with a local dance and songs from Ding Dong have been popular among their selections.

The national netballers who won silver at the recent Commonwealth Games were seen dancing to Ding Dong's Bounce after a win over Australia.

The Romeich Entertainment artiste said it makes him proud to see the athletes dancing to his songs and would like to honour them by creating a song dedicated to Jamaica's sporting prowess.

"It is always a blessing; sometimes I can't get used to it ... to see everybody partake in something that you create with the help of God," the entertainer said. " I was thinking about it (making the song) because I receive a lot of support from everybody who plays sports; the athletics team, netball team, football team and now I'm venturing into the basketball side of it too."

"I was thinking about it, but I cannot do a specific one for a specific group so I'm trying to articulate how I will go about doing an overall thing for Jamaica's sporting teams or athletes," he said.

At school, the DJ whose given name is Kemar Ottey, said he also participated in sports.

"I used to play football but I got a knee injury and from then I just stopped," Ding Dong said.

However, he said his days of participating in sports are in the past.

Despite this, one can catch him and his Ravers crew at sporting events as he said he is still a big sports fan.

"No matter what I do, I am an entertainer and I like to mingle with the people because I am for the people," the Ravers leader said.

He said he does not have a favourite Jamaican athlete but he has a lot of love and respect for them all.