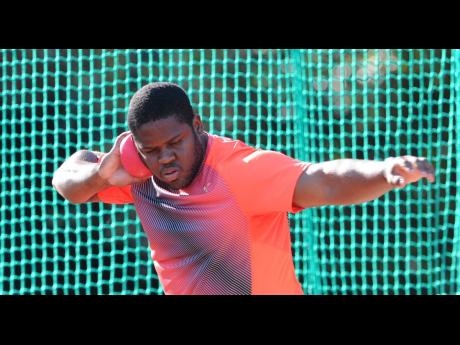 NINE-TIME national champion O'Dayne Richards is slowly putting the disappointment of his sixth-place finish in the final of the men's shot put at the recently concluded Commonwealth Games in Birmingham, England, on the back burner.

The 33-year-old says despite achieving a championship best effort of 19.90 metres, well below his personal best of 21.96m, he wasn't totally disappointed in missing out on a podium finish.

"I wasn't heavily disappointed at the time, I did my best on the day, but after reflecting and thinking about what I had expected to throw I became even more disappointed as time passed and as I analysed my performance," said Richards.

Next on the agenda will be the upcoming North American Central American and Caribbean (NACAC) Championships in The Bahamas from August 19-21. Richards, back in 2018, won the bronze medal and says he's eager to get back to that form which brought him some level of success.

"Well, I'm hoping to replicate or improve on that performance," added Richards.

Richards, who is also the national record holder with his mark of 21.96 metres in 2017, says the possibility of getting close to that mark soon might not be on the cards.

Due to cancellations and postponements in the global athletics calendar in recent times because of the COVID-19 pandemic, next year will be another World Athletics Championships, which is set to be hosted in Budapest, Hungary, followed by the 2024 Olympic Games in Paris, France. Richards says he's already eyeing how he will enter those championships.

"Yes, it will be a stacked two years. Of course, this season, or the latter part of this season, is a base I'm setting for next season and I hope to improve on all that I've done so far in preparation for those major upcoming championships," Richards concluded.