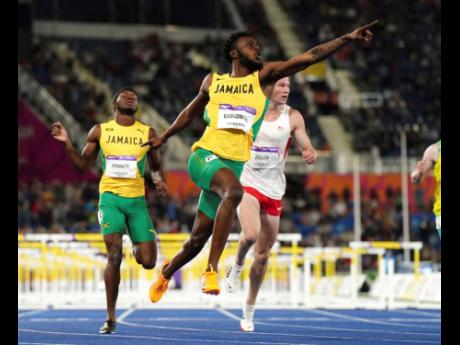 Jamaica’s Rasheed Broadbell celebrates after winning the gold medal in the men’s 110-metre hurdles final during the athletics competition in the Alexander Stadium at the Commonwealth Games in Birmingham, England, yesterday.

Rasheed Broadbell ran the race of his life to provide a golden lining to the cloud left by the withdrawal of Olympic champion Hansle Parchment from the 110 metres hurdles final at the Commonwealth Games in Birmingham, England yesterday.

The Jamaican, 22 in just more than a week, earned an early birthday present with a powerful display of hurdling that eased him clear of the field over the final four hurdles to shave two hundredths of a second off of his lifetime best.

Broadbell, who has shaken off hamstring problems and changed his coach this year, finished ahead of Barbados' Shaun Braithwaite with England's Andy Pozzi third.

"I've been training really hard for this and my coach said I've just got to do what we have been practising - getting in a rhythm to go with my leg speed and I'm really pleased with both the gold and the time," said Broadbell.

"I was on the phone to Hansle before I came here and he said stay focussed and you have it ... and that's what happened.

"He called me and said - "I'm not going to be out there as a precautionary measure" - he didn't feel right and he's an Olympic champion and knows what's best for him."

It is the second time in a couple of weeks that Parchment has made a major championship final and pulled out, only this time, after withdrawal during the warm-up in Eugene, he didn't even make it to the stadium.

Orlando Bennett, running in the lane inside Broadbell, couldn't join his compatriot on the podium and faded to fifth in 13.43.

There was no joy for long jumper Shaun-D Thompson either, as the 25 year-old Jamaican was agonisingly denied a medal by a mere one centimetre as an incredibly small three centimetres separated the top four in a nail-biting final.

Thompson put in a season's best 8.05m in round three but it proved not enough by barely the width of a slice of bread as the Bahamas' Laquan Nairn took gold on countback, after both he and India's M Sreeshanker tied on 8.08m.

Jovan van Vuuren edged the bronze medal from Thompson with a leap of 8.06m.

However, Traves Smikle was on the right side of an ultra tight competition as he sneaked third, for another Jamaican bronze medal, with a throw of 64.58m in the discus - just two centimetres further than Samoan Alex Rose.

In women's 400m hurdles Jamaica's trio of Shiann Salmon, Janieve Russell and Rushell Clayton stormed into the final of the event.

In heat two, Clayton was also a winner, as she ran the fastest time clocking 54.93.

Jamaica's duo of Natalliah Whyte and women's 100m champion Elaine Thompson Herah are through to the semi-finals of the 200m.

Thompson Herah followed next in heat five and crossed the line in 22.80 ahead of Scotland's Beth Dobbin (23.10) and Australia's Jacinta Beecher (23.13).

Kadrian Goldson, Jamaica's lone representative in the men's 200m, is through to the semi-finals. Goldson, who competed in heat six, finished second in 21.19 behind Adam Gemili of England who stopped the clock at 20.92.

Jamaica pulled off a big win in netball. Captain Jhaniele Fowler described her side as "incredible" after the Sunshine Girls were left dancing in the National Exhibition Centre Arena following their historic 57-55 comeback victory over Australia yesterday.

The Sunshine Girls trailed by as many as six goals heading into the final quarter but finished in resounding fashion.

Captain and goalshooter Fowler, who plays in Australia for West Coast Fever in Suncorp Super Netball, led the Jamaican assault with 47 goals, while Shanice Beckford supplied the other 10 goals.