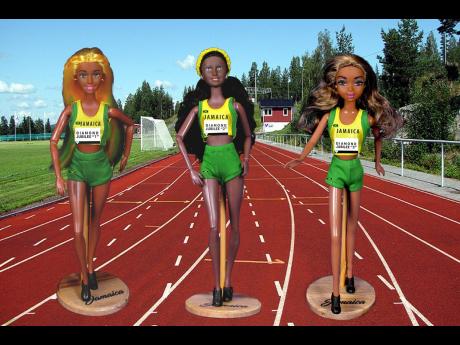 'Dolly' is a popular slang in Jamaica, used to describe an attractive woman and at the World Championships Shelly-Ann Fraser-Pryce, Elaine Thompson Herah and Shericka Jackson have been often described by Jamaicans as "di dolly dem."

Island Dolls owner Beverley Robotham-Reynolds is bringing this term to real life with her new collection of dolls in recognition of the athletes' clean sweep of the medals in the 100m on Sunday.

She said these dolls are to inspire young and aspiring Jamaican athletes.

"Sports is important to us, it is a part of our culture and we must encourage our young ladies coming up so that they too can be inspired to be great," Robotham-Reynolds said. "We all know the story of Shelly-Ann - as a matter of fact, if I am not wrong, all three athletes, and where they came from, and how much they have achieved today."

She said this line of dolls, called Sport Divas, will be available to the public for purchase on August 1.

"We are not going to be using names because we are not allowed to, but as soon as people see the dolls they will say 'Oh that's Shelly-Ann, Oh that's Elaine, Oh that's Shericka!' because the hairstyles will be a replica of exactly their hairstyles," Robotham-Reynolds said.

Robotham-Reynolds said this is not her first time making track and field inspired dolls as she made a collection in recognition of female athletes who went to the Tokyo Olympics last year.

She said she has also made dolls in recognition of Jamaican women who play other sports.

"I have always done dolls to represent other athletes or different sporting events such as in 2007, I did dolls to represent the Cricket World Cup when we had it here," she said. "I did netball as well and for the FIFA Women's World Cup in 2019, I had the licence to do the Reggae Girlz, and as a matter of fact I am in the process of trying to get in contact with the JFF to do the same thing I did in 2019 for the next World Cup."

Robotham-Reynolds said she has been in the doll making industry for more than 30 years and has made other dolls representing different things and different people as she tries to bring out the Jamaican culture in her work.

"I love my culture and I love my country," she said. "I bring out this in the dolls that I do."

Robotham-Reynolds said she would love the opportunity to meet the 100m podium finishing women and present them with the dolls she has made in representation of them.