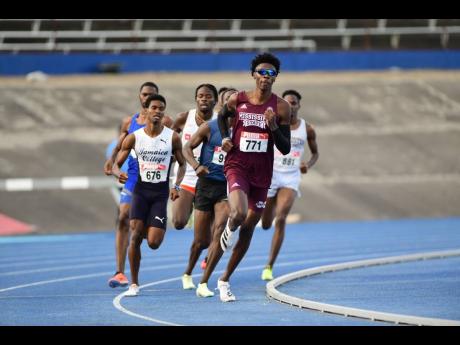 After winning his semi-final with the fastest time at the JAAA National Senior Championships yesterday, national 800m record holder Navasky Anderson promises to lower the time he set in May.

"The record will definitely be lowered, [but] I have been having a long season, if I am being honest, and if Jamaica expects me to perform at a very high level, they have to take that into consideration," Anderson said.

Anderson says breaking the record was a great feeling for him but not surprising.

"I opened my season with 1:46:51, and when I hit that, I definitely knew that this record was going to be mine."

But Anderson is looking for that new milestone at the World Athletics Championships in Eugene, Oregon, next month.

"I have to save as much as I can back in the tank to move to the World Championships; I am just here to win," he said.

"My entire theme for this year is confidence and I am pretty sure [and] pretty confident that I will be going into the World Championship final."

As for claiming his first national title, Anderson is relaxed.

"No pressure, no pressure at all!," he said. "I am pulling my fellow Jamaicans with me because I don't want to be the only Jamaican on top, I want to basically revive the 800m, bring the younger ones into the field, and continue to motivate and inspire everyone.

This is his first time competing locally since leaving for university in the United States, and he says he loves the support he is getting so far,"

Anderson has the fastest time going into the 800m finals as he clocked 1:48.24 seconds to win the first 800m semi-finals.

For the finals on Sunday, he will be joined by Tarees Rhoden, J'Voughnn Blake, Dugion Blackman, Chevonne Hall, Kimar Farquharson, Tyrese Reid and Brandon Kerr.