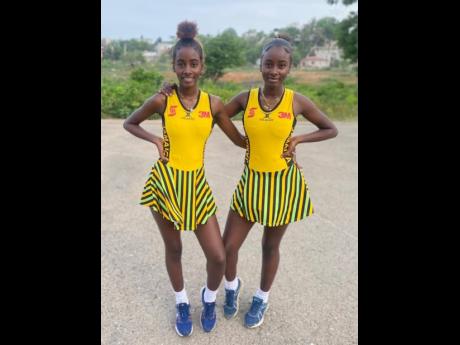 Twin sisters Tahlice and Tahice Redwood were born one day apart but they do almost everything together, including play netball at their age group for Jamaica.

At 18 years old, they have been playing for over a decade, half of that time for St Catherine High School.

"At first, we thought it was fun and we were just playing around, and we didn't even know it was a popular sport," Tahice said. "We started to take it seriously when we actually played and won."

Although Tahice is yet to get on the court for Jamaica in an international competition, Tahlice has represented Jamaica in various international games. She was a member of the winning squad at the Jean Pierre Caribbean Under-16 netball tournament in St Lucia in 2018. She has been selected to represent Jamaica's Under-23 team at the Caribbean Games to be held in Guadeloupe from June 29 to July 3.

The girls say netball has helped them to overcome many issues, and they believe it will provide them with more opportunities in time.

"Netball is like our happy space," Tahice said. "We use netball as a 'getaway' or 'we must get out of this situation', meaning, when we were growing up in our living circumstances, and we know netball would be our way out, [for example] getting a scholarship to university."

Through netball, the Redwoods have received part scholarships to study for their bachelor in education degrees in advanced secondary business, at the Moneague Teachers' College this September.

Their plan is to use netball to achieve other major goals.

"One of our major goals is get our debut (as Sunshine Girls) and international captaincy, and becoming a part of a winning Sunshine Girls team that would be ranked number one in the world," Tahice said.

Tahlice plays goal shooter and goal attack, while her sister Tahice plays wing attack, wing defence and centre. But, when the they are not playing netball, they like to dance and explore the island.