Fighting to keep the peace 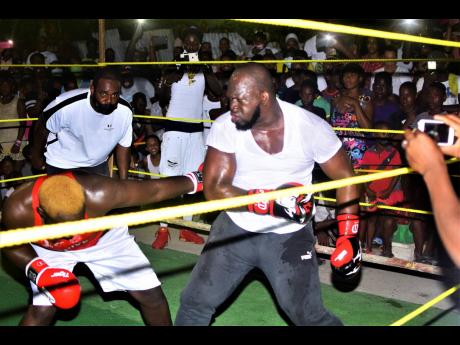 With COVID-19 forcing a halt to community sporting events across Jamaica in early 2020, many residents of Kingston 11 and other Jamaicans say they believe this is one reason crime has risen during the pandemic.

In an effort to lower the high crime rate in Kingston 11, the Cockburn Gardens community hosts a weekly amateur boxing competition called 'Jump Out Thump Out' to promote peace and unity.

Main promoter Rohan Orlando Reid, better known by his artiste name 'Young Wild Apache', said this all started out as fun but has grown to not only capture the attention of people across Jamaica after going viral on social media, but the event is keeping the youths active and out of trouble.

"The stats show that since COVID, crime rate has gone sky high because of the lack of jobs, the lack of opportunity and everything," Reid said.

Reid said this boxing event has already resulted in the area becoming more unified and he would love to see other communities do the same.

"Right now this is bringing back love in the community because people are coming from Cling Cling, Tower Hill, Building, Payne Land and Two Mile; so you can see that all of Kingston 11 is sharing the one passion," he said. "It is really holding the community right now." he said. "If three, four or five more communities do this, it would be a great look, because the youths would have something to do."

The event is mostly funded by donations collected from the crowd and this is used to provide a stipend for the boxers who fight that week.

Reid said he has hopes of making the competition bigger through possible aid from the Jamaica Boxing Board and other sponsors so that they can offer bigger cash prizes.

He said that there are new and promising boxers coming up from the event and Jamaica should look out for them as he believes they will make a great impact in the sport on a national level.

"We have a one youth named Miracle, we would want him to reach the heights where he is in foreign (abroad) boxing, so we know a Jump Out Thump Out do that," he said.

Reid said they also try to adhere to the COVID-19 protocols by keeping the crowd some distance from the ring and by distributing masks to especially help to protect the elderly who come to watch the events.

An elderly member of Cockburn Gardens, Richard Walker, said this is an event for both the young and old to enjoy because it promotes peace.

"I support the boxing because it helps us to support one another," Walker said. "We have to demonstrate the prosperity of our community so that people can come and go without having any fear."

Head coach of the Sugar Knockout Gym, Lindel Wallace, who has many of his boxers participating in the boxing event said this event is great for the community.

"I was glad when they invited us because it keeps the little guys active and keeps them out of trouble because by the time they get older, they can make a living out of this," Wallace said.

Wallace also said that he would also like the Government to do more than just supporting community sporting events, but also help to feed the youths who participate in sports to help keep them active and off the streets.