Cunningham on track for Rio 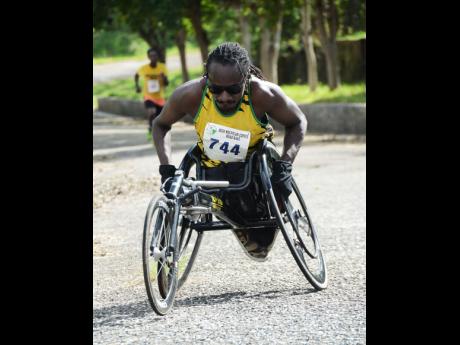 Ian Allen/Photographer Alphanso Cunningham competing in his state of the art wheelchair racer at Sunday's High Mountain 5K in Williamsfield in Manchester on Sunday.

Jamaica's Paralympic gold medallist Alphanso Cunningham will be taking on a new challenge for the 2016 Games in Rio de Janeiro, Brazil.

He is aiming to compete on the track, instead of in his customary field events at the September 7-18 Games.

The 35-year-old, who has won gold in both the discus and the javelin events at the Paralympic Games and World Championships, says he will be taking a break from field events this year to focus on his new path, and although the transition has not been easy, he says his preparation has been going well.

"It's not easy. I use to do track until I take up field events, but I just want to give the field events a rest for this year and try the track. It has been hard, but I am just doing what my coach tells: pace myself, relax and don't rush it, and it will come.

"So since I am doing track at the Rio Games this year, I started the road race real slow, as in the past, I tended to go out too fast. But it's hard work, and I still have a lot more work to do as this is a big year," he said.

"I basically focused on pacing myself throughout, while thinking about winning the race for the first time.

"It's a good feeling. The victory was wonderful. It was a good race," he said

Cunningham will be seen on the road quite often this season.

"For field events, I did some road races to get my fitness going, but now that I am doing track, my coach has advised me to compete in as many road races as possible," he said.