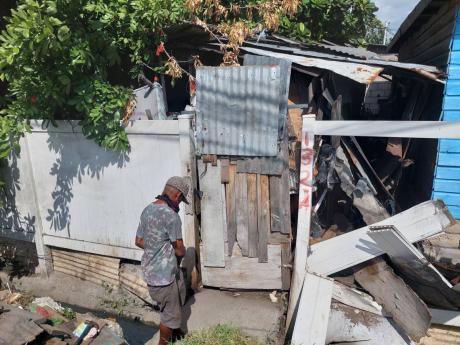 Clifton Gordon enters his broken-down home, a day after a car smashed into it.

Clifton Gordon stands outside his home which was damaged after a car plowed into it on Tuesday. 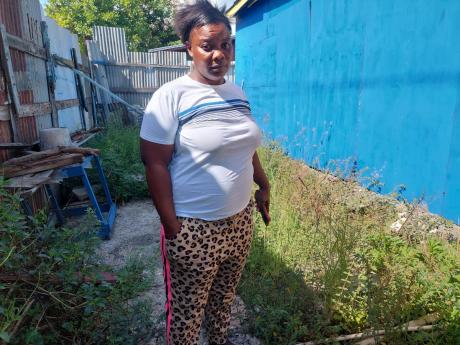 Elaine Reid says that after a truck ran into her house, nearly killing her daughter two years ago, they have been traumatised and are afraid to walk along Marcus Garvey Drive in St Andrew.
1
2
3

A senior citizen battling cancer is thanking the heavens after he was nearly killed in his own home by a vehicle.

Clifton Gordon, 69, has seen many crashes along Marcus Garvey Drive in St Andrew where he has been living for decades, but never thought that he would be impacted by one. On Tuesday, a car smashed into his bedroom, causing tremendous damage. Sitting on the sidewalk outside his gate yesterday, Gordon wore a worrisome expression as he gazed at his broken-down house. The senior, who is currently battling throat cancer, said that in addition to his medical woes, he is now left to ponder how his dwelling will be repaired. Unable to speak clearly because of his illness, he wrote down the details of his horrific experience. He explained how he narrowly escaped being killed by just seconds.

"Mi was inside the yard and about to open the gate and mi hear like sup'm lick up outside and because it sound so close, mi run back in and as mi run in, the car just come lick up in mi house. The house mash up and mi frighten and fraid, but last night (Tuesday) mi just have to pray and go back in deh go sleep. Mi would really glad fi some help to fix it because mi have to do surgery on the 28th a dis month and come back home," he wrote for our news team.

Meanwhile, news of Gordon's ordeal caused Elaine Reid's heart to skip several beats. As she looked at the damage to her neighbour's home, she recalled that in August 2020, a truck ran off the road, nearly killing her and her daughter in their home.

"Mi a talk to yuh and seet deh, mi skin a full a cold bump. It was a Friday evening and three a we inside the house and mi leave mi daughter lay down in the sofa a talk to her father on video call. Mi inna di kitchen a prepare food and mi just hear 'Boom' and mi feel sup'm lick mi inna mi head. Mi look out and mi see a trailer where di rest a mi house deh," she said.

Reid said the seconds that followed were a blur but she recalled screaming out her daughter's name.

"Mi nuh see mi baby, just di trailer alone. She was nine at the time and mi just a bawl out 'Nana'. One a di time mi a scream and mi can't hear mi voice but mi know mi a scream. Then mi hear one likkle voice say 'Mommy' and some youth come and dem follow mi baby voice and pull her out from under the trailer. The sofa that she was lying in mash up and the wheel stopped right at the side of her head. Hey, God good enuh," she said as a tear trickled down her face.

Her daughter suffered only minor injuries but was hospitalised for two days. She said they both remain traumatised and have not rebuilt the house, fearing that they may have a similar occurrence.

"Right now, is one of my friend and neighbours we with. We are traumatised to the point where we no longer walk along Marcus Garvey Drive. Every time we hear a heavy vehicle a pass, we get nervous. What keep mi going is that our lives were saved but mi a tell yuh say mi baby especially traumatised bad. Even her grades drop," she said.