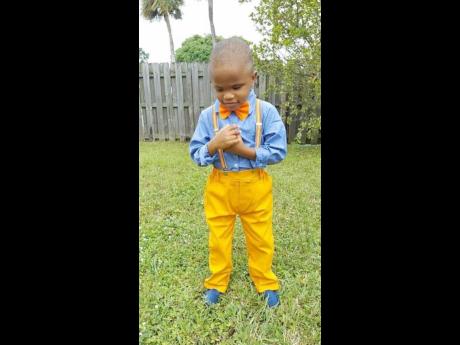 Life for five-year-old Aaiden Ervin has been a constant struggle. He was born prematurely, weighing only two pounds, and suffers from a series of medical conditions, including blindness in both eyes, autism, deafness, chronic lung disease and muteness.

He has already done five major surgeries and requires another to help deal with an abnormality in his brain that has been detected. The child's mother, Kerrian Ellis, said some of the bones in her son's skull have shifted to the back of his head and this has made his already difficult life more challenging.

"I think this is really painful for Aaiden as he constantly pounds his eyes and now they are sinking to the back of his head, because he is applying pressure from the outside. Aaiden's brain is shrinking instead of growing," she said.

"He acts up a lot and bites himself and others, so I have to monitor him constantly and ensure that he is on the medications to keep him calm. Whenever he is not on his meds, he is like a tornado ripping through life. My boy is five years old but is delayed in every type of way possible, and these are lifetime damages. He is too damaged to even learn Braille," she added.

Renowned neurosurgeon Dr Roger Hunter said persons with this condition usually require a cranioplasty. This is the surgical repair of a bone defect in the skull resulting from a previous operation or injury.

"It is plastic surgery of the bones of the skull. It is very important that this type of corrective surgery be done as it can help to improve the patient's overall cognition. There is a reason why we have a skull as it prevents physical damage to the brain, which is soft like a banana. It is not a good idea for the brain to be exposed to atmospheric pressure and that is what is happening now," Hunter said.

Aaiden was born at at the Mandeville Regional Hospital and was admitted for approximately three months. The story of the young mother and son appeared in this newspaper in 2019, at which time Ellis appealed for medical assistance on his behalf.

"My baby can only detect light, shadows and bright colours, and if one of my eyes can be used to give him a chance to see ... I don't know if I could donate one of my eyes ... 'cause I would love to do so," Ellis said in a 2019 interview.

Following the publication of the article, persons rallied to assist Ellis and her son. The toddler was flown to the United States of America for eye surgery, but the procedures were not successful.

Ellis, who has resided in Florida for the past two years, said she is unemployed and struggles daily to make ends meet. Her son requires 24-hour attention due to his condition. The mother, though, has pledged to fight for her child, with every fibre of her being.

"I am doing the best for my son and I will continue to do so. I don't date anyone or even go out. I don't have time for a relationship. I just have to be thankful for my neighbours who, anywhere dem a go, dem will draw mi out of the house. This is my life," she said, while explaining the impact of her son's illness on her social life.