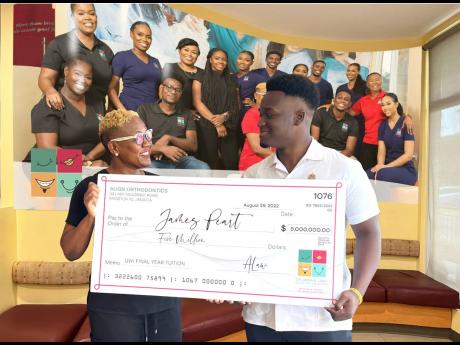 After suffering several years of late fines and financial holds caused by not paying his tuition, final year dental student James Peart can now finish his studies with a smile.

Last week, Peart, 22, received a $5 million scholarship from Align Orthodontics to finish his undergraduate studies in the doctor of dental surgery (DDS) programme at The University of the West Indies, Mona. Peart told THE STAR that it was the GoFundMe account that he started in expectation of financial struggles that caught the attention of his donor.

"One day I got call saying, 'Hey James, this is Dr Anna Law calling from Align Orthodontics' and was basically telling me that she definitely understands the struggle. She's definitely been there before and understands how challenging it can be to find the money to pay for tuition. And then she said 'Okay, I'll talk with my team and let you know how much we'll support you'," he said.

"I got a next call and she was saying $5 million. Like literally when I heard it I had to clear out my ears, see if I had anything in there or if I was just hearing doubles. I was literally speechless."

According to Law, this is the largest donation the company has made in the 27 years it has been operational. Prior to the scholarship, Peart, who is from Westmoreland, funded his studies via a mixture of scholarships, student loans, private loans, odd jobs and family donations.

"From third year I've basically been jumping from financial hold to financial hold meaning the majority of times I'm owing the university $600,000, $800,000, $2 million, $1.7 million. So it's a case where I'm literally just going by faith," he said. The yearly cost of Peart's degree is $4.3 million, though he said that the cost of his housing in Kingston, along with books and tools for school, carries his yearly bill to approximately $5 million. Even though Peart missed the September 2 payment deadline, he told THE STAR that he is happy that he can now pay the fees.

"It's definitely a big burden off my shoulder and my family because I'm telling you, in my family I've literally been calling and talking to everybody and they've definitely been chipping in. I couldn't have made it this far without my family and friends and even my church family supporting me along the way. It's just a case where I'm just shocked and completely grateful to the point where I'm just trying to do the best dentistry I can, both for myself as a future practitioner within Jamaica, as well as for my patients," he said.

He added, "In life we all have different opportunities and chances, it's just about putting ourselves out there and being honest with ourselves about who we are to claim those opportunities to make the best of them, and then in return, create those same opportunities for others. If you look at Align Orthodontics, it's the same thing they've done as former young professionals and then growing to the stage that they're at now and then able to do this for a random stranger. It's just simply, Wow."