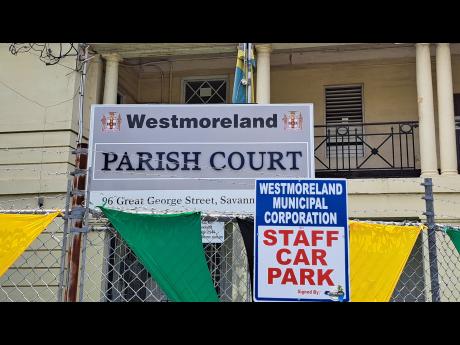 A police officer assigned to the Westmoreland Parish Court was unlucky enough to get covered in blood as one of the three men accused of stealing $2-million worth of cellular phones during the Dream Weekend party event collapsed in court on Tuesday.

The incident unfolded moments after Warren Scavella, the defendant in question, was remanded in custody along with his co-defendants Kieron Liscombre and Denvere Robinson following the deferral of their bail application until August 16.

Shortly after the bail hearing was put off, Scavella collapsed and had to be held up by a court officer, spitting what appeared to be blood even as he was made to sit on the prisoners' bench before eventually being removed from the courtroom.

"Di man did a spit blood from him nose and mouth. Is somebody else's clothes mi have on, mi haffi go home and change," the unfortunate cop complained moments after the incident.

A woman identified as a relative of Scavella also raised eyebrows as she hurled abuse outside the courtroom, declaring "I have you all on tape," even as officers demanded that she remove herself from the premises.

Minutes prior to the drama unfolding, presiding judge Sean Walters set the bail hearing for the three defendants to August 16 after being told that the men's criminal records, which had previously been requested, had not been placed on the prosecution's case-file.

Scavella, Liscombre, and Robinson were held and later charged following a police operation on July 31, during which several items were seized. The items included 16 Iphones, two Samsung Galaxy phones, two laptops, and 36 R-Sims which are used to unlock phones; along with $200,000 in cash and £30.

The items were allegedly stolen from patrons of the Dream Weekend event, which was held in Negril between July 29 and August 1.