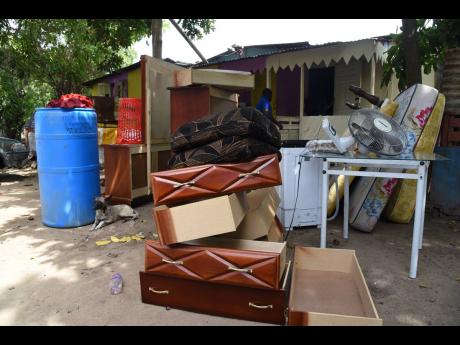 Residents of the community of Mexico in Gregory Park, St Catherine, pack their furniture to move from the area following a second firebombing this week. 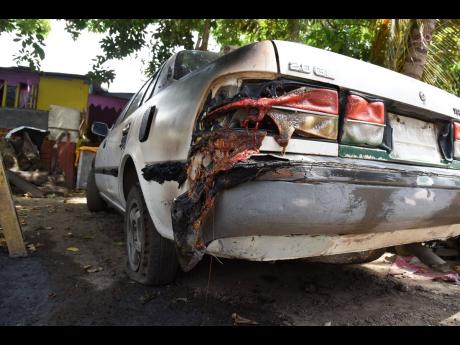 This car was partially damaged in the attack early Thursday.
1
2

As she packed the few belongings that she managed to save after her dwelling was firebombed in Gregory Park, St Catherine early Thursday, Niecey frantically searched for her cat 'Pringles'.

She said she will be leaving the embattled community but not without her furry friend.

"Is a brown and white cat. Mi nuh see him from mi come back this morning but mi nah leave him and mi dog Miss Fatsco," she said. After searching through the rubble, the scared kitten was found behind a house. Pringles leaped into its owner's arms for a few seconds but dashed away, seemingly frightened by all the commotion. After much coercing, the animal returned to Niecey and was placed in a box to be taken to its new home. In addition to Niecey's dwelling, 10 other houses were firebombed, leaving at least two dozen persons homeless.

According to police reports, the houses were firebombed early Thursday and a man was killed in a police shoot-out. Commander for the St Catherine South Police Division, Senior Superintendent Christopher Phillips, said a security team was responding to arson attacks when it came under gunfire from criminals in the Dyke Road area. Four high-powered rifles and a handgun were seized at the end of the firefight. Niecey said she was at home with her partner at midnight when she heard a banging on her door.

"Mi hear 'boom boom' on the door and then mi hear 'blow' on the glass window and mi see one bottle drop on the floor with fire. Mi frighten bad and mi boyfriend throw water on the bottle but it make the fire worse and one a the man outside say 'Anyhow yuh try out it again mi a go shoot yuh'. So mi run come to the back and hide and try draw out what mi could. Mi cousin dem run out a their house but, when dem run out, di man dem hold dem and take weh dem phone," she said. On Tuesday, three houses were firebombed in the community as gunmen traded bullets.

Niecey told THE WEEKEND STAR that she has lived in the area more commonly known as Mexico for approximately four years but will not be spending another night there.

"Yuh mussi mad. I will not build back anything here so. Mi haffi go start over again. Mi can't even rent a house right now because this wasn't something that I planned for. I had to stay the rest of the night at my manager house. Imagine mi leave me house 6:30 a.m. to go work and come back home tired and, as mi fi get a little rest, dem firebomb the house dem. We a hard-working people who nuh involve in any war. Mi work more than 10 hours a day. A Christmas gone mi buy some new furniture," the lab technician said.

Niecey said other victims had already left the space, most with only the clothes on their backs. Several unexploded bottle bombs were also observed.