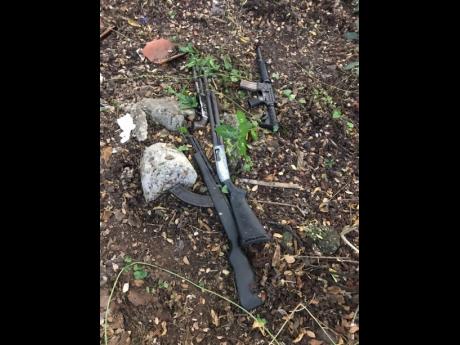 A man was shot dead early this morning during a confrontation with the police after they were responding to a report that eight houses were firebombed in Gregory Park, Portmore, St Catherine.

Commander for the St Catherine South Police Division, Senior Superintendent Christopher Phillips, said that the police has now recovered six weapons in total (up from five) when the shooting subsided.

He also said that the attack appeared unified and was carried out by a "mixture of different persons operating in the area".

"The team responded to houses that were set ablaze in the Gregory Park area, Mexico to be exact. Further operations were carried out in the area and the team came under heavy gunfire off the Dyke Road. The team returned fire and one member of the criminal syndicate met his demise and five weapons were seized inside their. We are still on location and will be doing further operations inside this area," Phillips told The STAR.

It is the second time in as many days that criminals have coordinated such an attack in Gregory Park. On Tuesday, three houses were also firebombed along Cottage Drive around 3 a.m.

During that attack, two board structures were flattened, while another premises was set ablaze at Mitchell Drive.