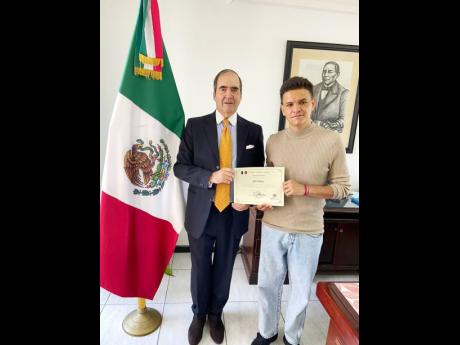 Earlier this year, Mexican reggae artiste Jah Fabio was elated to receive a plaque from Spotify in recognition of his more than 2.5 million streams for Soy Una Estrella, a track produced by Contractor Music Group and which features Tommy Lee Sparta.

Last Saturday, however, that feeling of elation was eclipsed when the Mexican Ambassador to Jamaica, Juan Jose Gonzalez Mijares, honoured Jah Fabio with a certificate of appreciation at a private ceremony at the embassy in St Andrew. It was given in recognition of his being an ambassador for Mexico as he flies the country's flag high in the reggae music arena. Jah Fabio did himself and his country proud when he performed at Reggae Sumfest on July 22.

"Mi feel good about everything ... to be in Jamaica and to get this certificate from my country on Jamaican soil. Me a di only artiste from Latin America [to perform] inna di whole history of di festival. Mi fans and family and friends dem happy because my suit represent Mexico and Jamaica with di flags of di two countries sew pon it," Jah Fabio, who has mastered Jamaican Patois told THE WEEKEND STAR.

Boswell 'Stampede' Lammie, who is a member of Jah Fabio's Jamaican team, accompanied him to the short ceremony.

"Jah Fabio was awarded the certificate by the ambassador - who I have to say is a really cool guy - for his 15 years in music and for making that bridge between Jamaica and Mexico. He is signed to Danger Zone Records and is the only artiste from Mexico working seriously with reggae and dancehall and is managed by Jamaicans. Him come here and is like a kid in a candy store ... him want to go everywhere," Lammie said.

He shared that Jah Fabio gained a few fans, especially at Boom Box Fridays, when he gave them the unexpected - he took the mic and started talking in Patois.

"Boom Box Fridays ... dat is a real Jamaican party and I could see di people dem a wonder wha' dis bwoy yah a come with," Jah Fabio said. "But when mi jump pon di mic me get a big forward and mi love it. Di people in Jamaica embrace mi everywhere I go. I like di current artiste dem but yuh cannot forget yuh roots."

Jah Fabio is currently working on an album, has recorded a song with old school dancehall artiste, Little Harry, and shot the music video in Kingston.